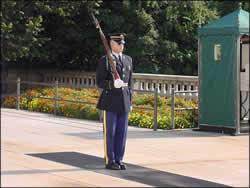 If men are willing to live up to these standards, can the blood
bought child of God be less willing to live up to the standards of the
Word of God?  I have seen the Tomb of the Unknown.  I have witnessed
the changing of the guard and been impressed with the dignity, honor
and duty of these men.
May we as soldiers of the Cross be as sharp and dutiful in the service
to the "Captain of our Faith."

Standards for the one guarding the Tomb of the Unknown.

1. How many steps does the guard take during his walk across the tomb of the Unknowns and why?
21 steps. It alludes to the twenty-one gun salute, which is the highest honor given any military or foreign dignitary.

Other requirements of the Guard:

They must commit 2 years of life to guard the tomb, live in a barracks under the tomb, and cannot drink any alcohol on or off duty for the rest of their lives.

They cannot swear in public for the rest of their lives and cannot disgrace the uniform or the tomb in any way.

After two years, the guard is given a wreath pin that is worn on their lapel signifying they served as guard of the tomb. There are only 400 presently worn.

The guard must obey these rules for the rest of their lives or give up the wreath pin.
The shoes are specially made with very thick soles to keep the heat and cold from their feet. There are metal heel plates that extend to the top of the shoe in order to make the loud click as they come to a halt.

There are no wrinkles, folds or lint on the uniform.

Guards dress for duty in front of a full-length mirror.

The first six months of duty a guard cannot talk to
anyone, nor watch TV.

All off duty time is spent studying the 175 notable
people laid to rest in Arlington National Cemetery.

A guard must memorize who they are and where they are interred. Among the notables are: President Taft, Joe Louis (the boxer) and Medal of Honor recipient Audie Murphy, (the most decorated soldier of WWII) of Hollywood fame.

Every guard spends five hours a day getting his
uniforms ready for guard duty.

I therefore, the prisoner of the Lord, beseech you that ye walk worthy of the vocation
wherewith ye are called

This I say therefore, and testify in the Lord, that ye henceforth walk not as other Gentiles walk, in the vanity of their mind